A couple of years ago, I wrote a post about burning SD cards on a mac… but I’m not gonna lie, I found it quite difficult to do. You can imagine my delight, when someone at work suggested I try Etcher near the end of last year. What a fantastic app for making burning SDcards easy!

Just a reminder – when you’re using a Raspberry Pi, you need to install an operating system on your microSD card. Most Pi users install Raspbian, however, I’ve been using pi-topOS a lot for work. Installing an OS usually requires wiping the SD card manually then using clumsy software or even accessing the command line to install the new OS. Whereas with Etcher, you get clear feedback on process in a very easy, visual way.

Etcher is available for Windows, Mac and Linux, it is free to download and easy to install. 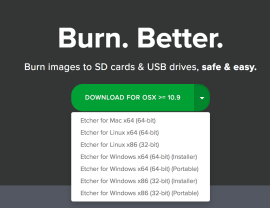 On my old MBA I had a lovely SD card slot so it was REALLY simple for me to use – literally I downloaded the latest version of Raspbian or pi-topOS, put the SD card in, select the downloaded file (no need to extract the file, just use it as is), select the SD card and Flash!

Check out this gif from the Etcher website – it really is that simple!

So… one peril I found was in my own stupidity.. I nearly flashed my USB stick instead of the SD card, only noticing at the last minute that the drive I’d selected was too big to be an 8GB SD card…

I’m sure you can turn it off, but Etcher automatically verifies the SD cards its burning, which does double the time it takes the burn an image. However, I found it used very little processor power and I quite often had SD cards burning in the background while I got on with my other work, which meant that by the end of the day I’d burnt a fair few SD cards to be workshop ready (I’m OCD, I like things to be prepared).

Seriously, I can’t fault Etcher, it has a fantastic interface, it’s easy to use, you don’t need to pre-wipe the SD cards, you just pop them in a burn away – so, so easy!

Good luck and enjoy!! Now… how do I burn SD cards on my new MBP??