Following on from my post about the application for Google Innovator, here are thoughts on the build up to the training!

Differing from any other training I’d been on before, there was a lot more hype in the build up to Google Innovator – we were quickly added to a hangout and invited to a group call a week later so that we could all get to know each other (we were told to have an item to show that represented us). Unfortunately for me, the call happened to coincide with a planned visit to Cornwall so that William could meet his Nanny, so I didn’t manage to last the entire call duration, but the bit I did sit through really got me excited and I was already looking forward to meeting the rest of the group.

I feel like this is one area that Google (and Picademy for that matter) really got things right – a small group of 36 people is much easier to get to know and feel included in and it’s fair to say that there was a sense of family by the end of our Innovator training.

It wasn’t long after the call that we were given another exciting update that only helped to further bond us all, as we were assigned a ‘coach’ from a previous innovator cohort and placed into smaller teams of 6. I was officially part of “Team Jonas” and our journey had begun.

During #GoogleEI academy in Stockholm #SWE19 I have the honor to coach @Antonio_nubely, @CatLamin, Richard Hallinan, Richard Sparks, @MsHertzig and Michelle Nugent. Our voyage has begun! #SWE19TeamJonas @GoogleForEdu #GoogleEDU pic.twitter.com/YlrCCEUIcZ

We’d also been assigned our first task, a paired activity where we questioned each other’s statements – there were a series of tasks to help us find a ‘root cause’ which were really interested and helped prepare us a little for the academy itself. We also had a team task to come up with a name and a chant to be performed at the academy.

Then, two weeks before the academy started, something peculiar happened on twitter…

Super excited for the #SWE19 #GoogleEI cohort that is getting ready for their adventure! When the time comes, don't be afraid to abandon technology and go brute force with your cryptography! #NYC19 is here for you! It's game time! pic.twitter.com/AaBuxliu6r

This was followed by a flurry of tweets featuring scrabble pieces, as well as a very small handful of our cohort getting a luggage tag, a scrabble piece and a logo from a previous cohort. Clearly something peculiar was going on…

Then things started getting really peculiar:

Now I have a . (I would call it a full stop, but @emmabpass calls it a period) #SWE19 #GoogleEI pic.twitter.com/H0HPeSD1XO

All credit to Jessilyn Swanson for realising that the dots meant it pointed to a website before I’d even had a chance to even engage in the challenge, but fortunately for me, the challenge wasn’t over yet!

As more innovators received their letters, the website’s questioning suggested to me that we might need to split off into our individual teams in order to solve the next phase and I happened to get lucky – with just three letters to our team, I was able to figure out our password (which was ‘upload’) and we were the first team to complete our pre-innovator challenge. On top of that, I was totally hyped and excited about our journey to come – It was so much fun trying to figure it all out.

So, the big day was getting closer, there were tasks that we needed to complete, we’d had meetings with our team, we’d chatted on the hangout and we were all set to head out to Stockholm – we’d been encouraged to record our flight times in a doc so I was able to see that one of the Innovators was flying out with us… which, of course, was when disaster struck…

My little boy got sick – at nearly four months old, he got his first cold and it was terrible. The weekend before he was bad, but seemed better the day before our flight, but at midnight, with the alarm set for 4.30am, he woke up screaming at the top of his lungs. With the help of Calpol and a vapour plug in, an hour later we got him back to sleep, but I spent the next few hours panicking about whether or not we should go ahead with the trip. When the alarm went off, I hadn’t slept a wink and we had to have a serious chat about whether or not to get up and go, but eventually we decided it was worth it – all credit to Stuart for supporting me even after three hours sleep.

Later than planned, we got to the airport, rushed through security and walked straight onto the plane, bumping into fellow Innovator Kev at the doors to the plane. Tired and a little anxious, we were ready to fly and luckily, the little man seemed a lot better already. Spot the tired mum and grumpy baby in the picture I posted to Instagram (not really realising quite how terrible we both looked until we landed and I saw the comments).

From the airport, we took the ever-so-clean Arlanda Express into the city with Kev and headed to our hotel, desperately in need of some sleep, only to find our room wouldn’t be ready for another hour or so. Hungry and exhausted, we decided to head out to City Hall for some Swedish meatballs and a brief spot of sightseeing. 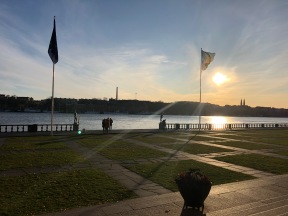 Knowing that several of our fellow Innovators were already in Stockholm, Kev and I had half jokingly suggested that we should all meet at the Flying Dog, which appeared to be a pub in between our two hotels… little did we know that the Flying Dog would become the Innovator bar of choice for the next several days.

So, after a brief nap in our extremely luxurious hotel room, we headed out to meet ‘the gang’ with the plan of popping in to say hi and then going off to find some food… two hours later we eventually headed back to the hotel, thoroughly enthused by the lovely people we had met already.

Now all that was left to do was to attempt to get an early night before beginning our Google adventure the next day!