So, after creating my single room and getting my head around how to use this software, I’ve made a start in creating my full game from the map I created earlier: 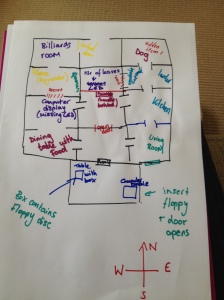 As a starting point, I created every single room, which meant I had to give them all names. I would suggest that the rooms are named during the planning phase.

Once I’d created all of my rooms, I could then add in all of the entrances – I know in my final game that I want some of the doors to be locked and/or hidden, but for now I just want to get them all in place – fortunately there is a tick box as part of the ‘exit’ creation tab, which allows you to make your exits two-way, meaning you don’t have to create them twice (once for each room). 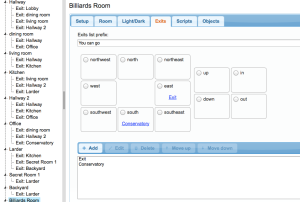 So, my next step is to hide/lock some of my doors.

And now I can start populating the rooms with objects.

I’m not going to go into too much detail, but my game creation took approximately 3 hours and then I had to ask a friend to beta test it, at which point several problems were identified. I’m happy for people who aren’t sure to drop me an email, but I also found the creator of text adventures, Alex Warren, on twitter and he seems very happy to help and get involved.

So here’s how my populated game looked after creation: 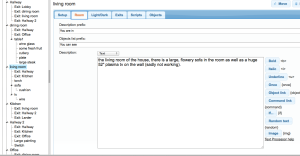 And here’s a copy of a few bits of the log from my friend playing through, which helped me to make some changes.

One thing this highlighted to me was the importance of creating an object and a description for every single noun in the room. My room description mentioned a computer, but I hadn’t created an object called computer and this led to my friend getting very, very frustrated.

I also found that it was important to add extra verbs to word – in one room I wanted to have a picture which you could push to one side to reveal a switch, I discovered two things: Firstly, you need to drop a REALLY big hint in the description that the object can be moved and secondly, that you need to think about the different verbs that people might think of to describe pushing or moving or shoving a picture out of the way. I decided to make the object a container AND edit the verb field like so:

Hopefully, like me, you’re currently bouncing up and down about the cross curricular links between this particular programme and English/literacy. Not only do the children need to plan their story carefully thinking about how events link into one another, they also need to think carefully about nouns and verbs. They need to know what a noun is in order to understand that every single object in your room is a noun and therefore needs to be created as an object and given a description!

When a pupil finishes their game it can be ‘published’, but this only make it available to other users in the group, making it a safe environment to make mistakes and a great way to help each other think about errors. It would also be an ideal opportunity to discuss debugging as each user tests one another’s games.

My final word on this is that I think it will be tough to teach, I think it will be hard work to explain all the nuances to the children and probably require a lot of running around, but I also think it has so many positives that it would be an invaluable classroom tool as long as you take the time to understand how it works.

If you want to play my game, click here and for now, I’m off to plan my next game!!