If, like me, you’re a complete novice to the pi, simply use arrow keys to move down to ‘finish’ and press enter (the mouse doesn’t work in menuconfig).

Unless you have changed it, the default username is pi and the password is raspberry – when you type in the password, nothing appears on the screen and this can be unnerving for first time users – fear not, it’s perfectly normal.

You’ll now be presented with the command line (I have only just discovered that code can be typed directly into the command line, without booting up the operating system). The command line is usually a black screen with white writing and, in the case of the Pi, a green cursor marker or some green text.

If you know a bit of Python, or you’ve downloaded an OCR card such as the Singing Jelly Baby and want to just make the Pi DO something, you can start typing in code here, but it is more common to head into the graphical operating system, Raspian, by typing in ‘startx’ and hitting enter.

This will take you to the Pi’s desktop, which should look a bit like this: 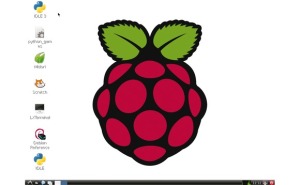 If you have bought an SD card which comes with a pre setup operating system, you may not have the latest versions of some software, but fortunately it is fairly easy to get things sorted out.

So, you have several things ready to go – Midori is the Pi’s internet browser (be prepared for it to be slow), Idle and Idle 3 are both used for coding in Python – there is an interesting debate about which to use, but for the time being stick to Idle, which recognises the language of Python 2. LXTerminal is your main command tool and then you have Scratch. You also need to figure out how to install Sonic Pi and Scratch GPIO so here’s the first bit of code you’ll need to use (you’ll need to be connected to the internet):

press enter and type in:

This should install Sonic Pi on your Raspberry Pi – cool huh?

Just so you know what you typed in, SUDO stands for “Super User DO” or, admin user is asking you to do something. The apt-get update is basically saying – check for updates, but don’t actually do anything with them. Your next line of code says “see that update for sonic-pi, now you can install it”

For Scratch GPIO, here are the two lines of code to type into your LXTerminal:

One of the joys of the Raspberry Pi is that it took me around 30 seconds of searching the internet to find the information to install both of those applications – the Pi community is large, friendly and eager to share. You will find that any problems you have are quickly dealt with by helpful users so don’t be afraid to ask.

One other key bit of information – to turn the Raspberry Pi off, you MUST type into either the command line or LXTerminal:

and this will power down your Pi – try not to just unplug it as this can corrupt it!